This exhibition of paintings and associated works represent for me the fulfilment of a vow (the votive thing) to say something about our contemporary, urban situation particularly in the light of my own ecologically oriented preoccupations.

The paintings, together form a narrative that starts on the left hand side of the gallery and progresses sequentially from left to right around the walls.  The works were conceived as a story-book with accompanying descriptive titles which relate the tale of two characters who meet briefly but significantly before departing to reflect on the implications of their contact.

Both the male and female roles in this ‘play’ demonstrate a reflective or moral capacity which is respectively ignored or acted upon.  The responsive position taken by the woman represents her redemptive act fulfilled through the making of the Kantha garment, where the collection of material scraps from all levels of society (she takes from the beggar) subverts the violation she experiences at the hands of the male character in the story.  This practice comes from a Buddhist tradition knowns as ‘Kantha’ or ‘Kesa’ which I have referred to extensively in a previous art project.  (A brief explanation of this tradition follows).

The exhibition is a personal response to many of the issues that to me seem particularly relevant in today’s society.  Painting no 9 for instance, ‘she slips on the stairs of her workplace’ symbolically represents a major change in society where the contents of that society, the traditional division of church and state or god and mammon, (the angle and the wallet) are laid bare.  The antagonist in the story having taken both, makes his choice and discards the angel as he returns to his familiar regime (painting no 14).  She is reminded of the duplicity that is sometimes associated with ‘sacrifice’ (no 13) and so takes the beggar’s offering, (no 15) instilling his contribution with value and finding her redemption through the unifying patchwork of the Kesa tradition, a tradition that emphasises humility through connectedness.

This series of paintings relates back to an exhibition I had in 1990 based on ‘The Tabula Cebetes’ by Cebes, (a disciple of Socrates).  His story is based on the myth of an allegorical painting in the temple of Saturn which is described by Hercules to the narrator where, in the house of life, decisions of moral complexity determine the traveller’s destiny.  In the eighteenth century, William Hogarth’s ‘Rakes Progress’ and ‘Hours of the day’ have been influences for this exhibition of works as well.  The combination of Western moral conundrums with an Eastern philosophical solution has always interested me.

The Tradition of ‘Kesa’

In this book ‘The Ritual garment of Japan. The Buddhist Kesa’, Allan Kennedy describes the evolution of this tradition from India to China then to Japan and through the South-Asian archipelago.

The tradition began in India when Buddhist was the dominate faith.  Originally knows as ‘Kashaya’ (sanskrit), the term refers to a religious cloth worn over the shoulders like the Jewish ‘Tallith’ or the Christian ‘Cope’ and serves a similar function doing ceremonial occasions.  However its use, function and purpose has changed over the centuries and throughout the different countries that have accepted it.

The characteristic feature of the garments is their ‘patchwork’ nature and were originally said to have been made up of pieces of cloth that had been discarded or offered for this purpose.  The tradition sprang from the original stories from India of the wandering Siddhartha (to become the Buddha) who discarded his privileged position in society and took up the life of the hunter in order to demonstrate his poverty and to achieve enlightenment.

Indian text, mentions the Buddha’s clothing as ‘Kashaya’ a sanskrit word meaning the colour of the earth and symbolically the material and physically-bound dimensions of life.  The term was phonetically transposed into Chinese as ‘Chia-sha’ and from Chinese into Japanese as ‘Kesa’.

The earliest Buddhist followers were known as Paribrajakas, who made their clothing from cast-off scraps and this practise was taken up by Hindu ascetics and continued up until the eighteenth century.

This practise was the origin of the Indian custom of the patchwork or ‘pieced’ cloth known as Kantha.  The sanskrit word ‘Pamsala’ meaning discarded rags sown together also symbolically represented the idea of humility and universality.  As the custom became more widely accepted it was traditional for the laity to offer cloth for this purpose, thus gaining some sort of merit.  This ceremony was called Kanthina in India and was continued in other countries where Buddhism flourished.

Later, the implied lenience of using donated cloth rather than cast-off rags, established some elaborate rules relating to the wearing and display of these garments but the original symbolic significance of universality and connectedness still remains implicit in the Kesa and Kantha traditions. 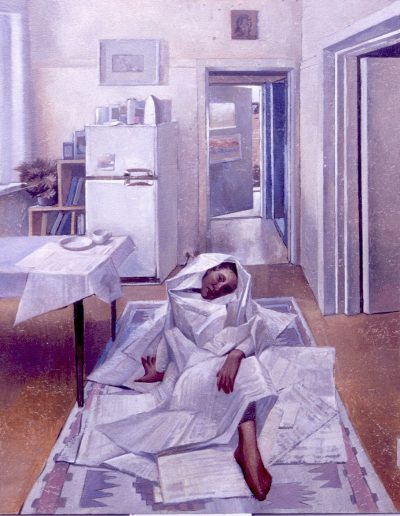 ‘Overwhelmed, she shored herself up’ 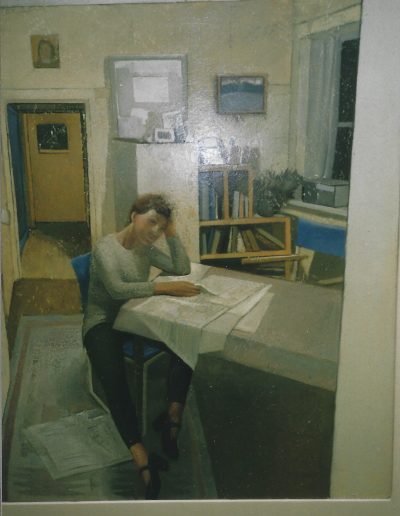 ‘She felt a growing sense of dimunition’ 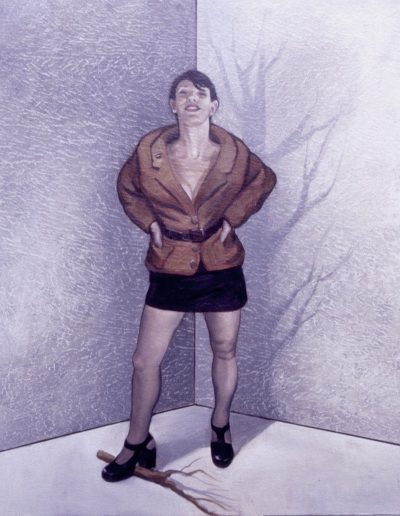 ‘She could be determined’ 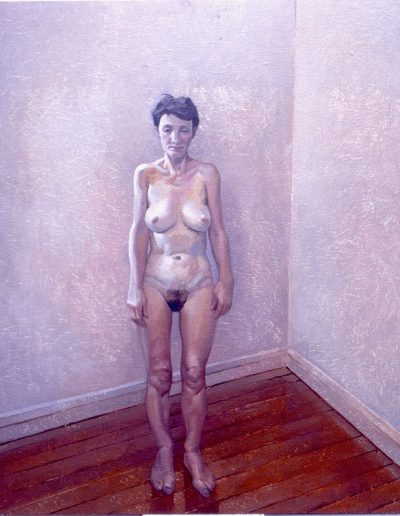 ‘Or she could be pre-determined’ 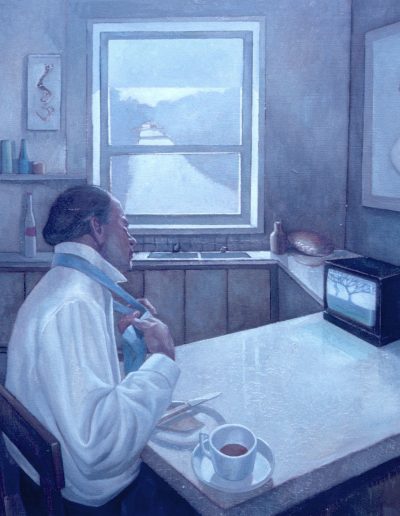 ‘He watches a nature program on TV’ 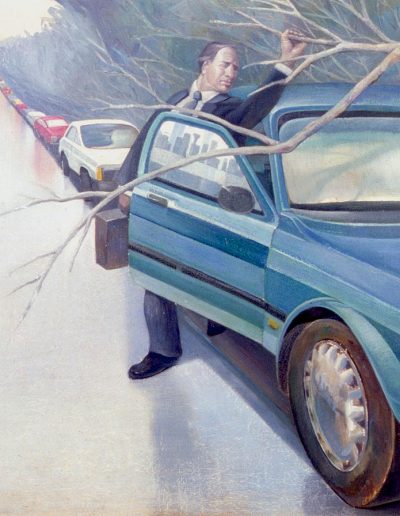 ‘His job holds back the divide’ 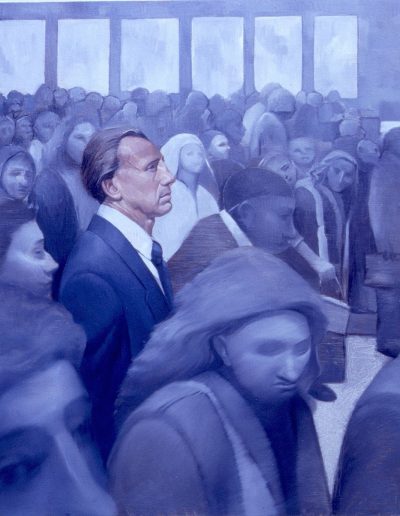 ‘He catches himself reflecting at times’ 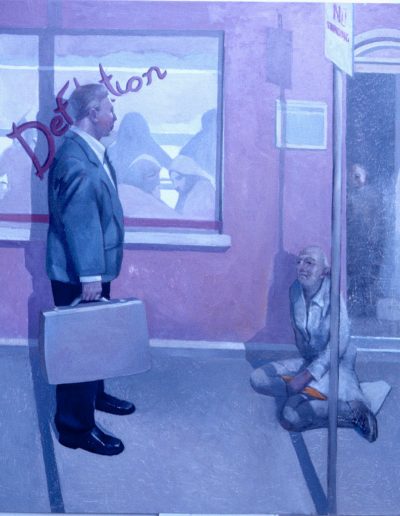 ‘And then he is reminded again’

‘She slipped on the steps of her work place’ 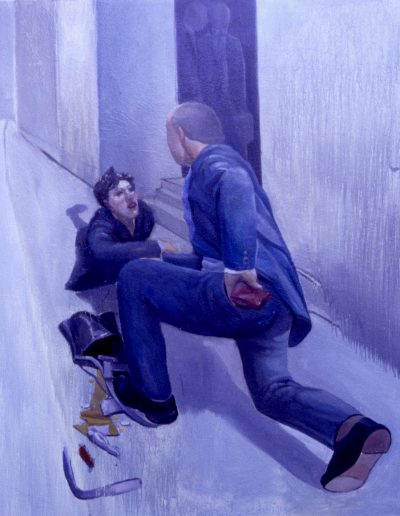 ‘The retrieval and the loss’ 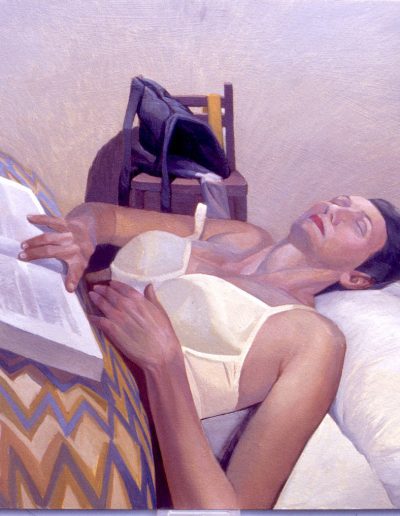 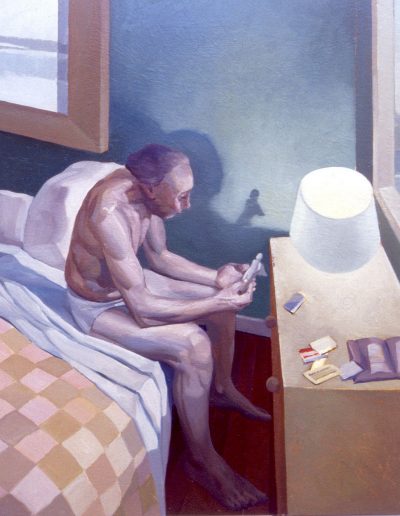 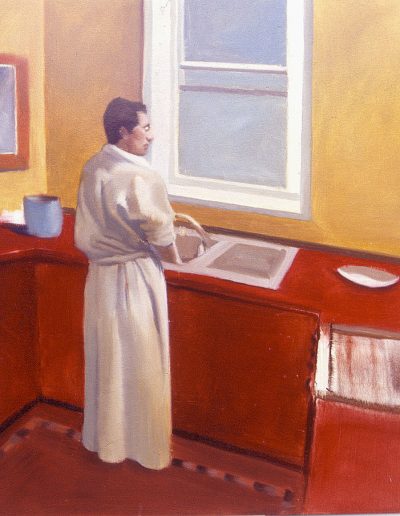 ‘She caught herself reflecting at times’ 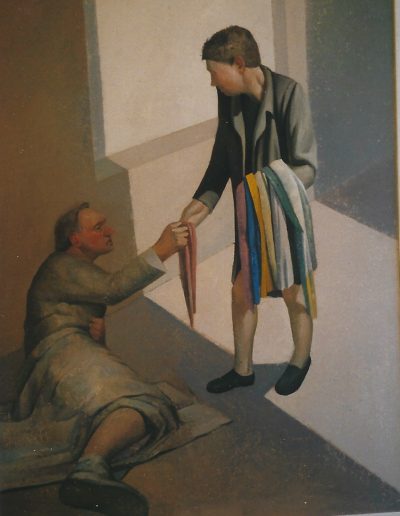 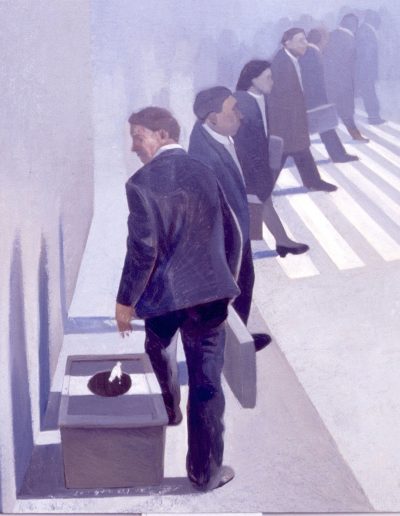 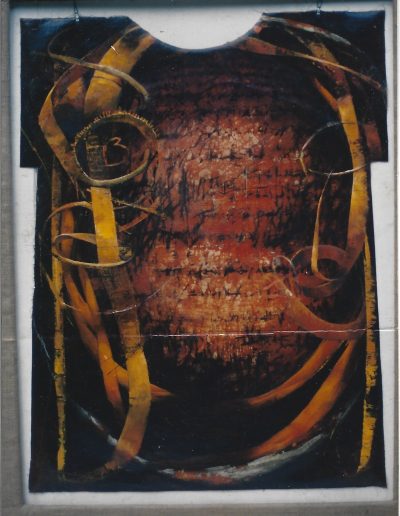 A short film made as part of this exhibition.  Directed and produced by Hadyn Wilson