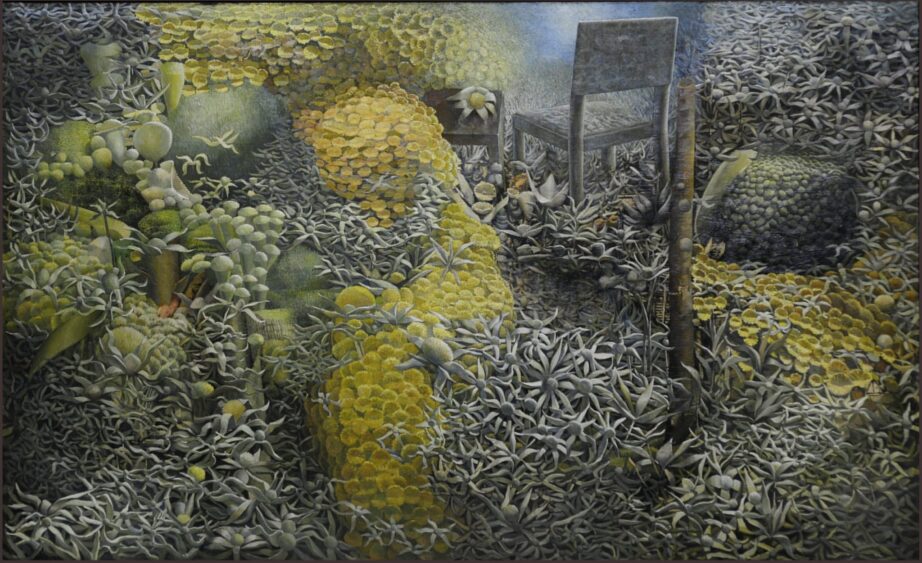 Hadyn’s art practice explores relationships between past and present, the real and imaginary, history and myth.

“Much of my work over the years represents an ongoing interest in how we connect with our environment and what sort of magic we can conjure from that relationship”.

Many of these projects have referenced historical and narrative imagery that as he explains “attempts to define our contemporary situation within the context of art history, inheritance and society, and particularly how these factors might impact on our environmental future”.

Living the creative life for over forty years he spends his time between his studio and home in Wollombi and his Sydney studio at Coburn Fine Art in Georges Heights, Mosman. Although having moved between these two locations for many years, the stimulation of these two very different environments has somehow worked in a way that provides constant inspiration.

His very diverse career has included paintings, public sculpture, and what he calls ‘cut-outs’ (low-relief paper sculpture), as well as experimenting with many mediums. “Looking back over the years I’ve come to realise that although having experimented in different ways, the consistent thread is the nexus between humanity and environment”.

Hadyn was 2019 Artist-in-Residence at the NSW State Library and had an exhibition there titled, Fake Truths: An Historical Novel, in 2021. The exhibition referenced the NSW State Library’s substantial collection of realia as well as their vast collection of historic paintings which he used along with his own reinterpretations to say something about the history as well as the lost history of these objects.  For eminent Art Critic, John McDonald’s review on Wilson’s exhibition please refer to the ‘Press’ category.

He also had a commercial exhibition at ARO Gallery titled, A Narrative Stroll in early 2021. That exhibition was a collection of some of his favourite artworks over recent years. A sort of mini survey of paintings, cut outs and lightboxes many of which have not been shown before.

In 2020 Hadyn was invited to be part of the Portraits Project celebrating the gallery’s 90th Anniversary.  He was also Guest Judge at the Ravenswood Australian Women’s Art Prize.

In 2019 he had an exhibition, ‘An Historical Novel. (An Archive of Found Histories)’ at NERAM (New England Regional Art Museum) in Armidale.  It was opened by John McDonald on 5 July and concluded on 13 October.

In 2017 he launched an exciting international public art project called ‘Locus Non Consequensia’ which is ongoing.

In 2009 his PHD graduate exhibition at Cessnock Regional Art Gallery called ‘Stories from the Archive: A Palaeobotanical Narrative’,

Director and Gallery Curator, Virginia Mitchell said of his work: “Artist, historian, scientist, environmentalist and curious onlooker Wilson seeks to tease out multiple layers of understanding and engagement with nature”.

In 2007 his survey show at Manly Art Gallery and Museum, ‘Hadyn Wilson: A Real Allegory’,

John McDonald in his Sydney Morning Herald article, ‘A ribbon for artistic pedigree’ (April 2007) said of his work: “Contemporary art can be a frivolous affair, but not for Hadyn Wilson (b.1955), who sees content and meaning as paramount.  Wilson is a genuine history painter who does not simply address “issues” in a superficial way, but looks hard at the details.  His preoccupations are social, political and environmental, but he filters these interests through the lens of art history, as if to remind us that the battle between nature and culture has an age-old artistic pedigree”.

Critics have variously described Hadyn’s work as challenging and surprising.

In his sell out exhibition at New South Wales House in London in 1985, Patricia Still in the The London Weekly Diary described his work thus “Ably supported by a mastery of his medium, his oils show a view of the world where everything is brightly painted curtain cloth while his drawings are strange but intriguing mythologies of crowded figures”.

Bruce James in the Sydney Morning Herald in 1999 referred to Hadyn as an artist who is an “underrated star who paints up a storm and a story”.

Terrence Maloon in the Sydney Morning Herald in 1986 spoke of an artist with “exceptional graphic abilities”.

Katrina Cashman, Mosman Art Gallery Curator said of his work: “Hadyn Wilson’s large scale installation of appropriated images is a tour de force.  It invites close inspection as each painting presents a revisionist expression based on original masterpieces of the time, in a comment on the era’s fabled histories and the reliable and unreliable narratives that surround them.”

Hadyn Wilson has over the years defended his position of a self-conscious diversity and sees this as a principle of his underlying philosophy. To quote from Guy Warren. “Many years ago I decided that, unlike some artists I know I wasn’t going to paint exactly the same picture all my life. That might be great for the bank balance but it’s bad for the soul. When you start copying yourself you die”.

Quoting John McDonald again in 2019 in relation to Wilson’s practice, “If you’re like Hadyn and you do a lot of different things, things that are intelligent, things that are based on projects that require stylistic difference which ask you to challenge yourself and change the way you think, the way you work, it’s not the standard ordinary thing to do for an artist.”

Hadyn graduated from the Julian Ashton Art School, Sydney in 1975 and in 1992 completed a Graduate Diploma of Art through the Australian National University, Canberra. In 1995 he completed his Masters of Fine Arts (Class 1 Honours) at COFA (University of NSW) and in 2010 he received his PHD at the University of Newcastle, NSW where in 2012 he was a Finalist in the ‘Newton-John Award’.

Hadyn had early career success in 1983 winning the Sydney Morning Herald Travelling Art Scholarship and awarded the Art Gallery of New South Wales ‘Dyason Bequest’ which took him on a study tour to the UK, France and Germany. In 1990 he won the Qantas Amnesty International Figurative Award which included a study tour to the US, Amsterdam and Prague. He’s had countless solo and group exhibitions throughout Australia and overseas and two major survey exhibitions in regional galleries here. He’s won a number of prizes, including the 2011 Gallipoli Art Prize and the 1988 Mosman Art Prize and has been a finalist in the 1990 and 1983 Archibald Prize, 1999, 1988 and 1987 Sulman Prize and 2016 and 1996 Wynne Prize. His artworks are included in many respected collections such as the Australian National University, Manly Art Gallery and Museum, Manning River Regional Gallery, Mosman Art Gallery, University of New South Wales, University of Technology.

One half of the diptych Cut Out 2023 #hadynwilso

The Painter. The Poet. (with reference to Robert A

Charles Conder and Girolamo Nerli in the studio.

Working on a new series of ‘cut outs’ . This

Out of lockdown Fake Truths: An Historical Novel

La Mer (the sea of humanity in lockdown) #lamer #

STORY 21: My interpretation of a painting of Jame

STORY 11: My interpretation of George Colville’