‘A Shared Cup and other works’

Explanation of the Painting, “The New Humanity – A Shared Cup of Billy Tea”

This has been done on oiled paper, using charcoal and oil paint, combed through to produce a corrugated texture.  The work has been approached from the point of view of producing a simplified, faceted description of form with a closer concern for surface texture.

“The New Humanity – A Shared Cup of Billy Tea” is in a way the antithesis of some recent and not so recent tendencies in the Art World.  Much of the ‘tradition’ of Contemporary Art is to find a theme worthy of the energy and ‘angst’ of the modernist arsenal, and usually reveals themes that lean towards the more threatening aspects of humanity.

The idea of this painting and the accompanying title, springs from a genuine concern that a painting (from a subjective point of view) can still express a positive human value, without the additional sentimental and moralistic baggage, normally associated with the subject chosen.  However to do this, I need to exaggerate and parody the idea rather than present it as simply a group sitting and drinking tea.  In having to do this, the main point of the painting is made – that is we tend to be prejudiced against themes that revel the benign spirit of humanity, which perhaps in the long run is our most durable quality.

The painting is not allegorical.  The people don’t represent any specific race or gender.   It merely tries to question our values – particularly within the Art World.

Explanation of the Painting, “Strutting with the animals”

This painting has two general, but interrelated themes. One is an historical reference to a particular painting by William Strutt, and the other, a comment on Australian society within the context of contemporary environmental concerns.

The reference to the Strutt painting ‘Black thursday’ begins with my first seeing the painting as a student, in a book on early Australian art by James Gleeson. I responded to the dramatic and stage-managed artificiality of the painting. I liked the cosy audience perspective of a scene painting in the ‘realist’ style of the day, yet within a self-conscious choreography in the placement of the figures, specifically designed to heighten the sense of drama. My response, I feel was motivated by my interest in the greater sense of reality when familiar and recognisable objects and figures are given an artificial context. The difference between the objects and their incongruous setting sets up a tension sets up a tension which enhances the ‘reality’ of both. Such are the dynamics of the theatre and have a greater psychological significance than we may first suspect.

The painting by Strutt was a recreation of the events that took place in Victoria when a devastating fire destroyed a huge amount of East Gippsland toward the end of last century. What Strutt painted was a scene not untypical of much romanticised historic works of the day, but it was the ‘Australian’ context that made me shoose this as a starting point for my own painting.

In the same way that Strutt’s work could be said to be a parody on a real events so my painting is a parody on an historical artwork but with an implication in it’s context of the more relevant and universal concern for our global environment.

I’ve deliberately made the animals and figures toy-like and characterless – slightly anonymous and therefore more representative in a general way. I’ve tried to make them monumental and symbolic.

Our human condition is both destructive and vulnerable at the same time. We light the fire and then run from it. We conspire to destroy an environment and so become victim. In Strutt’s original work man is pitted against merciless nature but in his vulnerability he is heroic. The subtle change in my interpretation is that we now flee to escape our sins. No longer the hero but the culpable assassin of the natural order of things pursuing first the Tasmanian Tiger and other things towards extinction.

The black cockatoo represents what Aboriginal legend believed to be the “fire carrier” due to the red feathers around the tail. It carried fire from one place to another. It’s sinister duty (and blackness) is contrasted in the centre of the painting with a white Ibis which represents the benign innocence of nature. The two perhaps battling for position at the focal point of the image.

In conclusion the painting does not summarise our destiny as one of irreversible self-destruction but I think represents the present state of flux we find ourselves in. As a race we still have an option to survive, however quickly that option may be disappearing. 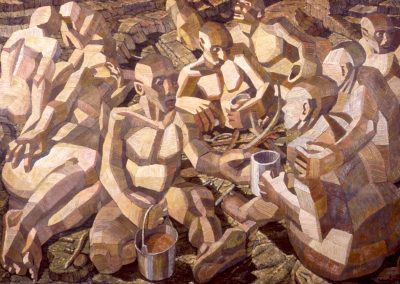 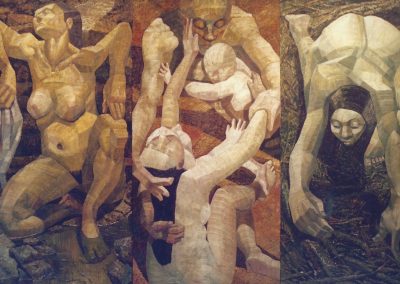 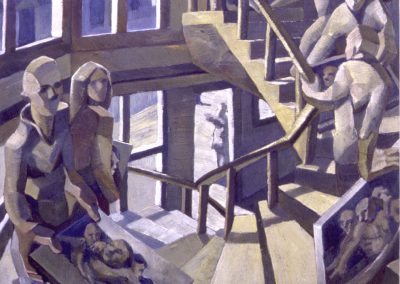 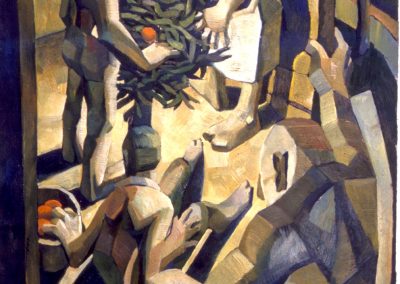 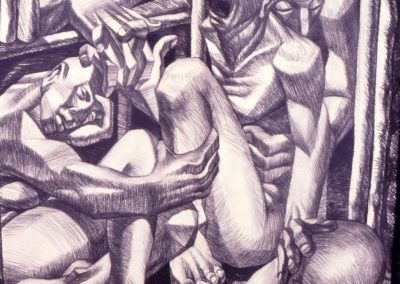 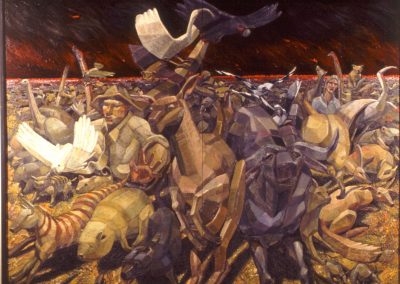 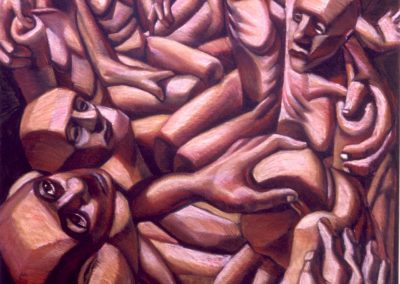 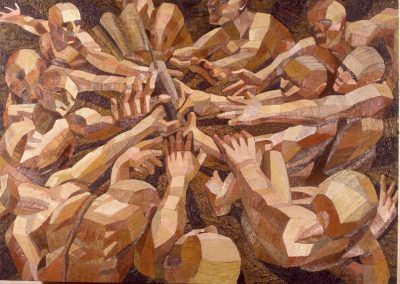 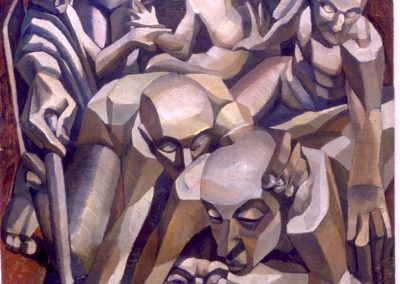 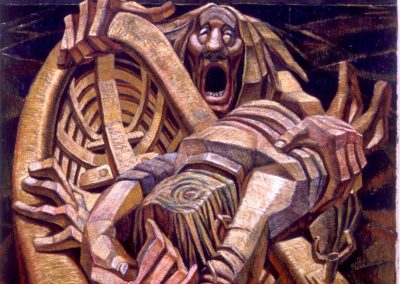 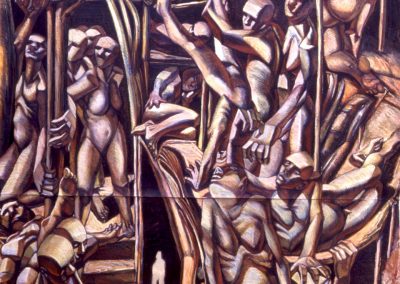 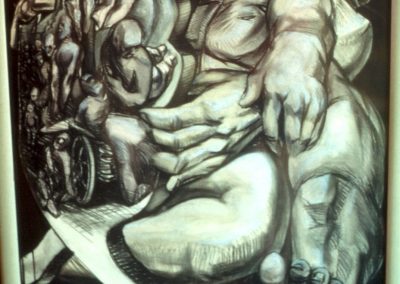 ‘Culture and the Philistine’, charcoal and chalk on paper 70 x 65 cm 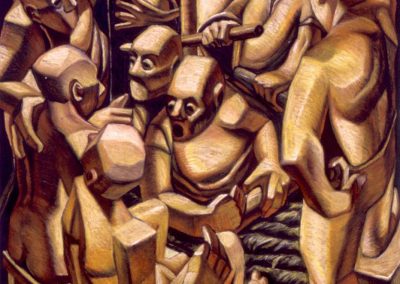 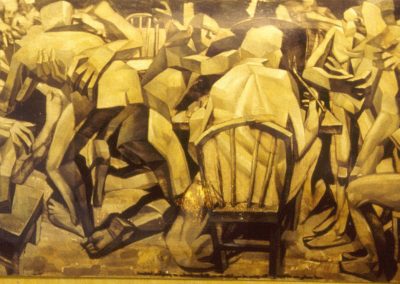 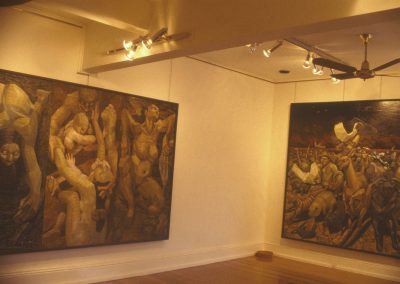